When a mattress wears out, the same features that favor horizontal comfort — big, tight, indestructible — lead to an environmental nightmare. 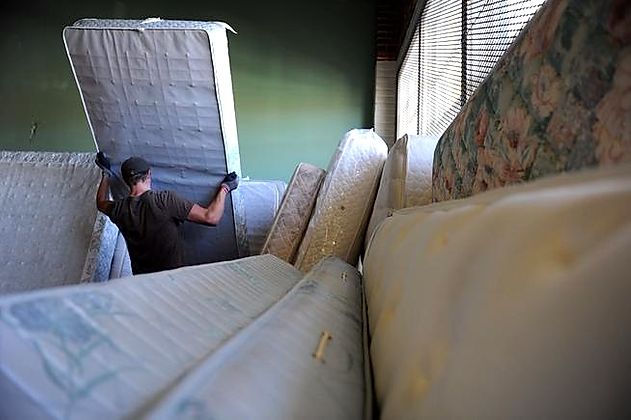 Spencer Anderson, 24, delivers used mattresses to Spring Back Colorado on Wednesday in Denver. Spring Back, housed in a former Army warehouse north of downtown, converts 3,000 mattresses a month into raw steel, fabric and foam.

Americans discard an estimated 8 million mattresses a year into landfills. These take up space, snag on bulldozers and, even after deep burial, float to the surface again. Mattresses rank among the gnarliest items worsening a slowdown in U.S. recycling after decades of gains. But a state-supported team in Denver is tackling the problem.

Spring Back Colorado, run in a former Army warehouse north of downtown, converts 3,000 mattresses a month into raw steel, fabric and foam. Team members rip the mattresses open using box cutters, extract the materials and cram them into crushers that create bales.

In the past two weeks, trucks hauled steel bales weighing a combined 26,880 pounds to a factory in Texas. The foam and fabric move to a carpet-maker in Commerce City.

“We’ve kept 36,000 mattresses out of landfills,” Spring Back director Chris Conway said. “If we reduce our waste, landfills will start to go away. A landfill could be housing, a youth center, maybe a soccer field for kids. We want to be a conscientious alternative to landfills.”

A crew of nine collects the mattresses, for $15 each, from motels, retailers and individuals. Spring Back also is embarking on light manufacturing, using “memory foam” to make pet beds, offered at Urban Dogg stores around Denver. The workers build new mattresses, using fresh covers, selling for around $200. Spring Back’s objective is to recycle 95 percent of the mattress.

The enterprise aims at reviving what until recently was a rapid national shift to recycling. Despite the free curbside pickup in Denver and hundreds of other cities, U.S. recycling has stalled, federal data shows.

The share of garbage that Americans recycle increased from 10 percent in 1985 to 31.4 percent in 2005, according to the Environmental Protection Agency. But recycling flattened over the past decade, reaching no higher than 34.3 percent.

Yet, Americans still produce an average 4.4 pounds of garbage per person each day.

The recycling slowdown is driven by falling prices for U.S. plastics, paper and other materials, linked to global factors such as oil prices, Chinese market turmoil and the rise of the dollar. Cities running curbside recycling increasingly must pay — without profiting — to get rid of the material in residents’ packed bins. And hard-to-recycle items such as mattresses make matters worse.

Americans buy 40 million mattresses and box springs a year, said Ryan Trainer, president of the International Sleep Products Association. Each year, they discard about 10 million, 80 percent of which end up in landfills, he said.

“Mattresses may be only a small slice of total municipal solid waste, but they are an annoying piece. It would be easier for landfills to operate if we could get mattresses out,” Trainer said. “Because they’re flexible, when earthmovers roll over them and cap them with soil, the mattresses compress and then expand. This causes them to swim to the top of the heap. They’re very difficult to keep buried.”

The Colorado Department of Public Health and Environment this year granted $192,000 to Spring Back for light manufacturing, after an initial grant of $77,000.

“We’re just looking to minimize the amount of material that goes into landfills,” CDPHE program administrator Eric Heyboer said. “Mattress recycling is one of those things people have tried in the past and failed at. Spring Back Colorado has a system that works. Hopefully, it will serve as a model for others across the country.”

The Denver operation is among the busiest nationwide. Spring Back projects have started in Salt Lake City; Charlotte, N.C.; Nashville, Tenn.; and Tacoma, Wash. Only a St. Vincent de Paul enterprise in Oakland, Calif., recycles more.

Off heroin for 2½ years, Josh Warnick, 21, said he not only welcomes the steady $8-an-hour job but embraces the mission.“You throw a mattress in a landfill, it never goes away. Reusing resources, that makes me feel better,” Warnick said. “We’re going to keep reusing mattresses because we can — not just destroy them and make more.”

A Story of Desire, Passion, and Drive: The Origin of Spring Back Colorado

A New Kind of Bedding: From Bedrooms to Gardens … and Beyond